Recent experiments have proved that the response to short laser pulses of common optical media, such as air or oxygen, can be described by focusing Kerr and higher order nonlinearities of alternating signs. Such media support the propagation of steady solitary waves. We argue by both numerical and analytical computations that the low-power fundamental bright solitons satisfy an equation of state which is similar to that of a degenerate gas of fermions at zero temperature. Considering, in particular, the propagation in both O2 and air, we also find that the high-power solutions behave like droplets of ordinary liquids. We then show how a grid of the fermionic light bubbles can be generated and forced to merge in a liquid droplet. This leads us to propose a set of experiments aimed at the production of both the fermionic and liquid phases of light, and at the demonstration of the transition from the former to the latter 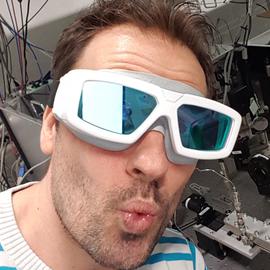